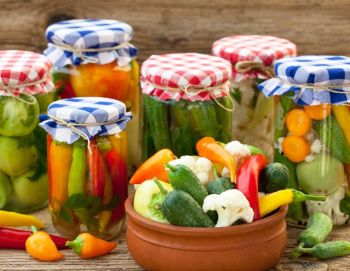 Fermented foods are a hot topic at present with claims of certain foods helping the gut microbiome and a host of recipes appearing on social media to ferment your own. NHD contributor, Madi Myers, takes a look at some of the evidence.

Fermented foods are, as you might expect, produced using the process of fermentation. Fermentation, in the context of food, is enzymatic conversion of food compounds by microbes. Fermented foods are produced by controlling the growth of microbes to produce the foods that we really want. Food spoilage i s also caused by microbial fermentation but since conditions aren’t controlled, you end up with a soupy pile of cabbage instead of a crunchy, tangy sauerkraut, for example.

The term fermented foods covers a huge variety of different foods produced with various raw ingredients (fruit, veg, grains, meat, milk, tea and more) and different microbes (bacteria, yeasts, fungi). Fermented foods also vary widely in the ecosystem of microbes present when you eat them; for example chocolate and coffee are produced using fermentation but don’t contain live cultures when you eat them, whereas raw kefir, kombucha or kimchi would. It’s the latter foods that are responsible for the recent explosion of interest in fermented foods, particularly in relation to how they might benefit gut health, but what does the evidence say?

GUT GOODNESS OR GUT NOTHING?

The thinking is that fermented foods which contain live cultures can benefit our gut health by:

The evidence for certain trendy fermented foods like tempeh or kombucha is non-existent as there have been (to date) no randomised controlled human studies on how they affect our gut health. For other types of fermented food there is a small body of evidence.

Sauerkraut
Looking at sauerkraut, one randomised controlled trial (RCT) found that in IBS patients (n=58) a slight reduction in severity of symptoms was seen with those given either unpasteurised or pasteurised sauerkraut.1

Sourdough
Studies into sourdough have shown that the fermentation by bacteria and yeasts in sourdough starters can lower oligosaccharides and even gluten when the starter composition is finely tuned to produce these effects.2,3 Generic sourdoughs though, might not have this reduction and so it’s not necessarily advisable to recommend sourdough to coeliacs or those following a low-FODMAP diet.

Kefir
There have been more human RCTS using kefir and finding varied results for easing constipation, but a potential improved eradication of Helicobacter pylori when provided alongside antibiotics.4,5 Kefir might also be tolerated by those with lactose intolerance the same way as yoghurt can be, as one study (n=15) found a similar reduction in breath hydrogen compared with milk.6

It’s important to remember that the body of evidence for all fermented foods (apart from yoghurt) is very small and often with methodological limitations meaning that right now there’s not strong evidence for benefits from consuming them. Keep this in mind when you see the marketing messages from fermented food producers, which often push the boundaries of where current evidence is. If you want to look more closely at the evidence for fermented foods and gut health I’d highly recommend the review article published last year by Dimidi et al (2019).4

It seems that although we don’t have much evidence backing specific gut health benefits, there’s no harm in consuming fermented foods. They’ve been a part of the human diet for thousands of years and recommending their consumption could improve nutritional quality of the diet as they’re often made with naturally nutrient-rich foods.

Madi is a Freelance Nutritionist working in both the food industry and the private sector.
She currently writes and holds workshops and cooking classes using
the non-diet approach to nutrition.