There is an assumption that athletes are the epitome of health, as it is in their interest to fuel themselves adequately to optimise their chance of success. However, the prevalence of eating disorders (ED) has been seen to be almost four times higher amongst athletes than within the general population.1 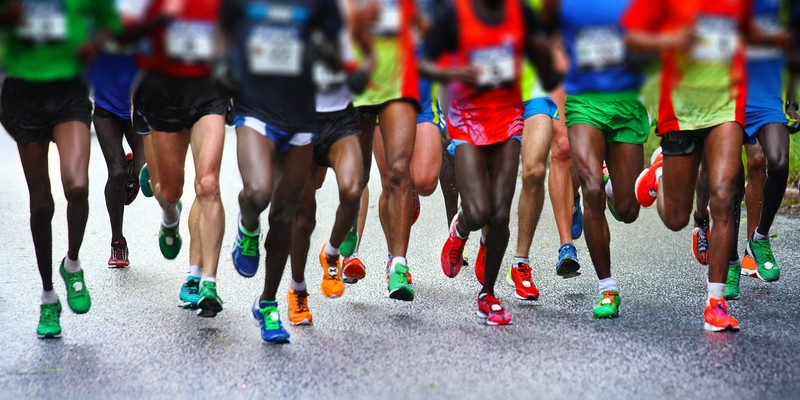 EDs are serious health conditions which severely impact an individual’s quality of life and can be fatal, with anorexia nervosa (AN) carrying the highest mortality rate out of all psychiatric disorders.2 However, these often go unnoticed and undiagnosed amongst athletes.

Not only are EDs detrimental to physical and psychological health but they can also significantly impair athletic performance,3 which has been identified as being the main concern for the athlete and their coaching team.4

There is a perception that leanness leads to enhanced performance in some sports. However, when a low weight is obtained through severe energy restriction or over-exercising, it has been seen to have the opposite effect.5,6 Electrolyte imbalances, low energy availability, and dehydration caused by a restriction of dietary intake can contribute to inadequate performance,5,7 along with numerous health consequences such as hormonal imbalances and decreased bone density.

WHY ARE ATHLETES AT AN INCREASED RISK OF DEVELOPING AN EATING DISORDER? 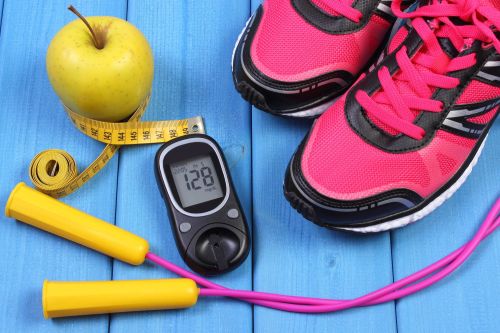 Disordered eating (DE) behaviours that are regularly practised are considered risk factors for developing an ED.8 DE behaviours include dietary restriction, a preoccupation with food, exclusion of certain food groups, rigidity around eating, and binge eating, which is the consumption of a large amount of food in a short amount of time and often occurs in private.9

There is a culture among some sports where disordered eating is ‘normal’ and even encouraged. For example, crash dieting to make weight for competitions and bingeing following competitions in weight-class sports such as bodybuilding or boxing.

Interestingly, there is a greater incidence of EDs amongst people with type 1 diabetes in comparison with the general population.10 Similar to athletes, there is an emphasis on appropriate food choices in individuals who suffer from diabetes, and this could promote DE behaviours such as preoccupation with food, obsession over food choices and feelings of guilt or anxiety around food. 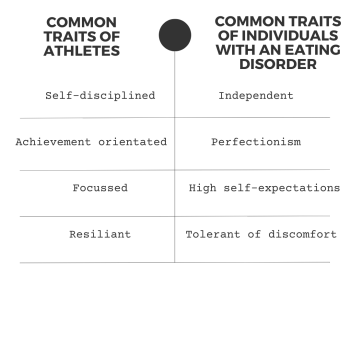 An individual’s personality traits are the most predisposing factors that influence the development of an ED.11,12 Many of the etiological factors associated with EDs form some part of being an athlete. To be a successful athlete, individuals must be driven, often sacrificing elements of personal life to improve their performance, as well as having high training demands and monitoring their food and fluid intake to support their training and recovery. The personality traits of those with a predisposition to EDs include: 13,14

All are seen in a successful athlete and even in those required to become successful in their sport.

Part of the higher incidence of EDs amongst athletes may be attributable to the fact that sports can attract those with a predisposition to EDs. A recent study identified that the reason for sports participation among physique athletes was linked with features of ED behaviour, potentially because the involvement in certain sports can act as a way of controlling and maintaining an ED.15

There are many other reasons influencing the risk of ED development in athletes, such as:

Whilst sport may not be directly to blame for the high incidence of EDs within it, considering that those with pre-existing or a predisposition to EDs are more likely to engage within certain sports and that personality traits do heavily influence an individual’s likelihood of developing an ED, the culture that exists within the sports industry is passive in response to EDs.

Athletic ideals, as well as specific body composition criteria that exist within certain sports, feed the development and maintenance of EDs, putting athletes at risk of damaging their health for the sake of reputation and performance.

Elle is a freelance dietitian who works with clients
with eating disorders, disordered eating and
athletes looking to improve their performance and/or
relationship with food.