Healthy weight charity, Food Active, along with other public health organisations, has campaigned against Coca-Cola's Real Magic Christmas Truck Tour of the UK for many years. Beth Bradshaw, RNutr, explains why public health activists feel so strongly about the marketing and promotion of well-known fizzy drinks, especially the Truck Tour during the festive season. 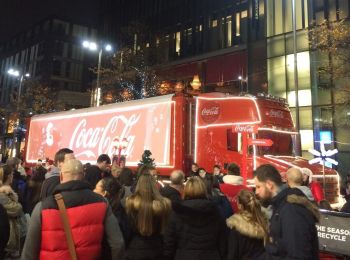 Coca-Cola would like you to think that their annual ‘Holidays are Coming’ TV advert is the official ‘start of Christmas’. People flock in their thousands to visit their Real Magic Christmas Truck Tour that graces towns and cities across the UK, spreading Christmas joy – along with their famous fizzy drinks. But how exactly did a sweet brown liquid become so intrinsically linked with Christmas? And given the rates of poor oral health and obesity within our children, is this really an appropriate association to be making?

And before you ask, I am a huge fan of Christmas.

What is the problem with promoting sugar-sweetened drinks to children at Christmas you ask?

Yes, there are zero sugar varieties and from a sugar perspective, these are a good alternative. However, from a dental health perspective, even zero sugar drinks can still damage our teeth due to the acids present.

There is also the issue of marketing. We know that exposure to marketing in children and young people can influence food preferences, brand preferences, food intake and ultimately weight status.4 The Coca-Cola corporation spends approximately US $4 billion per year on global advertising.5 We must not mistake the Coca-Cola Real Magic Christmas Truck Tour as anything other than a huge marketing effort.

We also know that this type of marketing doesn’t just happen at Christmas – Coca-Cola has been creative at making up traditions as part of their marketing campaigns since the soft drink was invented in Atlanta, USA, in the late 19th century. Coca Cola has an array of marketing activities and campaigns across the year. From sponsoring the Premier League to ‘Share a Coke’ campaigns, Coca-Cola are experts at manipulating our deepest wishes and our emotions whether they are talking Christmas or football.

Public health has also been through so much in the last 20 months. There is a huge impetus to improve our nation’s health to increase our resilience in the face of future threats. Is this kind of explicit marketing at this time of year really that appropriate? 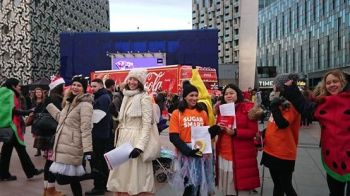 Food Active and other campaign groups, such as Sugar Smart and the Children’s Food Campaign, have spent many years making the difficult argument against the truck’s arrival.6,7 We’ve campaigned with tooth fairy stunts and have published editorials.8 we’ve sent open letters to Coca-Cola and host sites, including shopping centres and supermarkets, asking that they clean up their Christmas promotional campaigns.

In 2017, following intensified pressure, Public Health England issued guidance to local authorities on welcoming the Real Magic Truck tour to their town/city, making specific reference to the fact that the tour will be visiting areas with some of the highest levels of childhood obesity and tooth decay.

Dr Alison Tedstone, Chief Nutritionist of what was formerly Public Health England was quoted as saying: ‘The truck will be visiting some of our poorest areas which are often disproportionately burdened with higher levels of obesity.”9

NHS chiefs have also come out in criticism, with some calling on the tour to only serve water.10

The tour has received criticism from environmental health activists too – a recent report from Surfers Against Sewage crowned Coca-Cola as the biggest plastic polluter of UK beaches.11 Greenpeace published a spoof alternative Christmas advert in 2018, showing countless empty Coca-Cola bottles being emptied from the Christmas truck into the oceans.

There have been some positive changes to the tour in recent years to note. Firstly, the number of stops being welcomed on council owned land have all but disappeared. Instead, Coca-Cola has to rely on private landowners to host the truck. This is important as it shows councils understand the truck’s arrival is not in the best interests of their local community.

Perhaps one of the positive impacts of the pandemic was that it put the brakes on the tour completely, with it being cancelled for the first time in its history in 2020.12

Whilst the tour made an inevitable return in 2021, their strategy was completely different. This year, locations are being released one venue at a time, presumably to deal with possible covid-related restrictions, but likely to avoid organised demonstrations and further scrutiny from the public health and environmental community. This also meant the hysteria and time for people to plan a visit to the truck was significantly affected. As of 20th December 2021, the tour only included 13 stops so looks on track to be reduced yet again.

There are also reports that the only drinks being handed out are 150ml zero sugar varieties. It certainly feels like we have been able to steer the Coca-Cola Christmas Truck off course somewhat, to a place that has a much lesser presence and impact.

A MESSAGE OF GOOD HEALTH THIS CHRISTMAS

Huge progress has been made in recent years, and now the conversation turns to private landowners to see whether we can make the case for public health, even at Christmas time.

However, it’s very hard to argue against Coca-Cola’s Real Magic Christmas Truck Tour. Food Active and public health advocates have done so for many years being called the fun police along the way and advocates of the so-called “nanny state”.

But if that means spreading the value and importance of good health at Christmas time rather than welcoming a sugary brown liquid that symbolises the complete opposite, that is fine with me.

Wishing you all a happy and healthy festive season! Beth

Beth is a Project Manager and Registered Associate Nutritionist,
with a passion for the wider determinants of health and campaigning
for an environment that is more conducive to healthy
lifestyles and behaviours. Beth has worked at Food Active,
a healthy weight charity, since 2017 and volunteered for a further 18 months.
Beth has an undergraduate and master’s degree in
food, nutrition and public health.