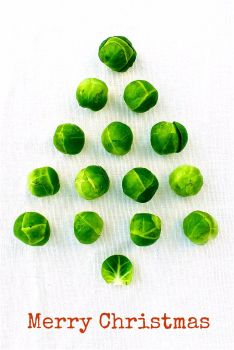 Christmas is coming and before too long families all over the UK will be sitting down to their traditional roast dinners, with turkey, roast potatoes and of the trimmings. For most of us those ‘trimmings’ will include the humble Brussels sprout. This small green vegetable may be the most divisive part of Christmas with some of us having a major passion for them and others considering them to be vile objects, barely deserving the label of edible.

From a nutritional perspective, the sprout is not particularly remarkable. A 100g serving has an energy content of 40 kcal and delivers 3.8 g of dietary fibre. They are a very rich source of vitamin K and a 100g serving can provide 169% of the US recommendations for adults. Sprouts are rich in potassium (389 mg/100g) and ascorbic acid (40 mg/100g) but are otherwise are no different to any other green leafy vegetable. Brussels sprouts are brassicas and as such share many of the characteristics of the other members of the cabbage family.

Sprouts may carry benefits which until relatively recently were unrecognised. As a cruciferous vegetable the Brussels sprout rich in a variety of sulphur and nitrogen-based compounds which may have anti-cancer properties. These compounds occur in two main groups based on chemical structure. The indoles are nitrogenous compounds which in the uncooked vegetable exist as glucobrassicin. Glucosinolates make up the other class of compounds and in the uncooked vegetable are present as glucoraphanin. Both chemicals form part of the plant defence system against infection and when plants are damaged by cutting, chewing or heating they break down to form smaller derivatives. The main derivative of glucobrassin is indole-3-carbinol, whilst glucoraphanin breaks down to a range of molecules called isothiocyanates, of which the major form is sulfopharane. When isothiocyanates and indole-3-carbinol are ingested they undergo further transformation in the acid environment of the stomach. The resulting derivatives activate enzyme pathways which are responsible for the elimination of xenobiotics and in this way, are able to inhibit the initiation of cancers. Some indole-3-carbinol derivatives have also been shown to induce apoptosis and inhibit proliferation of cancer cells. The same compounds are also present in cabbage, cauliflower, bok choy and cress and there are also reports that they may have beneficial effects in neurodegeneration.

The reason for the split view on the taste of sprouts comes down to the same groups of molecules which contribute to the potential health benefits of sprouts. Sulfopharane is the breakdown product of glucosinolates in sprouts. It is the compound which gives sprouts that vaguely sulphurous smell as they cook and is released in greater amounts if the sprouts are overcooked. The biology of taste is now well understood and we know that there are genetic differences in  the types, numbers and patterns of taste buds and receptors in the tongue (see https://www.nottingham.ac.uk/biosciences/research/research-themes/taste-map/taste-map.aspx). These differences mean that some people sense and respond to certain bitter compounds in an exaggerated manner. These people are termed supertasters. In contrast non-tasters are unable to detect the same compounds and show no response. Our humble sprout causes such division at the dinner table because the supertasters (sprout-hating) can detect the sulfopharane, yet the sprout-loving non-tasters are unable to sense it.

So, on Christmas Day as you settle down for a great meal with family and friends, give a thought for the humble sprout. It may be far more complex and deserving of your consideration than you may think!